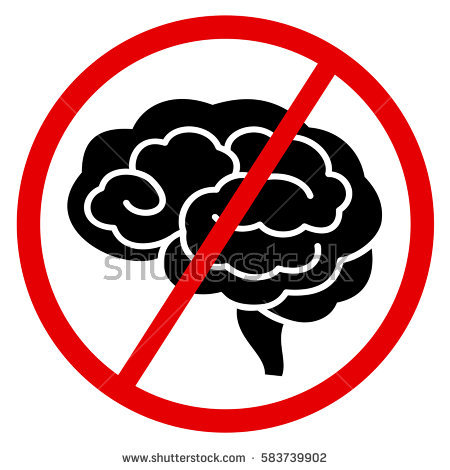 Intelligence is the ability to correctly figure out “the next step” from an existing step. The right sequence for intelligent thinking can be summarized as “if this, then that” or “if x, then y”. Conversely, stupidity is the inability to correctly appreciate “the next step” from an existing step. The thinking-pattern of the stupid person can be simplified as “if this, then this” or “if x, then x”. The stupid person has the distinct inability to infer other relationships or linkages from seemingly separate events. He lives in a world of incomplete sequences and relationships; of unconnected fractions and tautologies.

The following are the SEVEN LAWS OF STUPIDITY. These laws move a lot of people into action or omission. These are therefore, the people’s laws of physics. Whoever subscribes to them is guaranteed to be stupid.

1. One desired outcome is sufficient proof of causation. All other evidence to the contrary are irrelevant and should be ignored.

3. Chaos are another type of order. Inconsistencies within a statement are not contradictions but parallel-dictions that need not be reconciled but appreciated as unique phenomena in their own right.

4. Except as spirits or in magic, non-manifest things are not accessible and they don’t impact on the manifest.  Only the plainly visible, audible, touchable, drinkable, chewable etc are subject to study, control or manipulation.

5. Everything is separate, distinct: unique and can act upon one another only in proximity. Distant actors do not cause local events. “Far” has no impact on the “here”.

6. When food, sex, necessities and life are not threatened, any plausible explanation for a phenomenon, whether or not it is outrageous or logical, does not matter: it is satisfactory.

7. The long run is fiction. The immediate term is everything.

Every one of the seven laws mentioned above is either misleading or false. Therefore, those who navigate the world through these laws are living with lies. Stupid people have the distinct characteristic of being easily deceived. Their minds are filled with false notions of reality. Being ignorant of the true nature of things, the stupid become slaves of necessities. They cannot free themselves from their inheritances and environments. As well, they are like perpetual children in this world. They think they are adults but they are babies in the world of truths and they do not know when they are being played. Stupid people are vulnerable to appearances and they have no power to overcome intelligent systems and networks.  Of course, where everyone is deceived, life continues as “normal”.

The natives are happy whenever food, sex and alcohol are in abundance. This is especially so where -through the accident of abundant nature, good weather etc.- the basic necessities of life are supplied to people, regardless of their ignorance of science. This natural fortune that enables people to live as a people, deceives the stupid to think that their way of thinking and doing things, is correct. They don’t know that with time and as the world becomes more integrated and global, they would need to develop effective technologies in order to meet and beat the competition.

They don’t know that in a technologically competitive world, it is scientific prowess rather natural resources that rule. The problem is that stupid people are no longer living in isolated islands, forests and caves. Smarter people are having more and more access to stupid people and their resources through advanced technologies, subversive laws, structural dependencies; open doors and unsecure “passwords” of the stupid. In this clash of the wise versus the dumb, the outcome can only be one: the foolish shall perish. Unfortunately, these seven laws are found as gospel in many cultures. A great many children who are unfortunate to be born into such cultures learn this stupidity in the same way as the children of the wise learn intelligence. The first step towards freedom however is to know that you are not free. I will come back to the essay at another time. For now though, is this article “words to the stupid” or is it “a word to the wise”?

By Nana Oppong: President of the Distinguished Scholars of Africa

The New 4ps of Modern Marketing