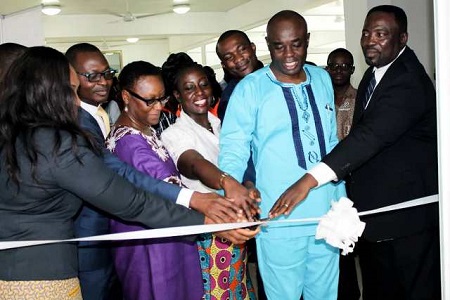 The University of Professional Studies, Accra(UPSA), has launched its Business Incubator Centre; to assist young professionals turn ideas into viable ventures.The Centre would also serve as the nexus between critical knowledge (theory) and practice for business start-ups in order to enhance teaching, research and learning activities.

Chief Executive Officer of Universal Merchant Bank (UMB) John Awuah, said students who would avail themselves to the facility must work at it; and be extremely careful the next businesses they venture in, when they attain some level of success as start-ups. Mr Awuah noted that as a Banker, he sees first hand business ideas that fail for one reason or the other, and was therefore hopeful that the Centre would address many of these reasons for failure.

“Am personally excited of the role UMB will play in supporting and assisting students who decide to take advantage of the initiative”, he added.

Vice-Chancellor of UPSA Professor Abednego Okoe Feehi Amartey, tasked the Faculty of Management Studies, initiators of theproject, to work hard in ensuring that the initiative achieved results and as well tasked students to prepare themselves to grab opportunities that would be provided them.

The rest were, Mr Arnold Parker, Ms Hamdiya Ismaila, General Manager at Ghana Venture Capital Fund, Mr Emmanuel Appiah Essel, Director of Finance, Ghana Gas Company and Mr Kwesi Livingstone, Chief Executive Servant, Nickel Keynesbury Limited. Mrs Fidelis Quansah, Dean, Faculty of Management Studies (FMS), UPSA, noted that all undergraduate students took a course in entrepreneurship, where students developed various business plans that were presented in class for discussions and feedback. She said a number of these plans had good prospects as businesses and could be accorded the requisite time and resources since they were all sources of business ideas for the Incubator Centre.

Mrs Quansah said the state considered the private sector as the engine of growth, and with its inability to offer jobs to the teeming unemployed youth, encouraging people to develop their own businesses had been a watch phrase of the state. She said the University also recognised the lack of adequate understanding of dynamics of entrepreneurship nationally and globally, adding that, it was in the light of these that the FMS of UPSA in partnership with Century Incubator, E4impact, Mobile Business Clinic, UMB and other promoters, had established the Business Incubator Centre.

The Dean noted that the Centre would bring quality practical business tools closer to the students as young professional entrepreneurs, bringing business acumen to the University Community and promoting competitiveness in the delivery of entrepreneurial skills. Ms Hamdiya Ismaila, General Manager at Ghana Venture Capital Fund, said in recent times, there was a growing evidence of a significant relationship between entrepreneurship, economic growth and poverty reduction. She was of the belief that government had a major role to play in terms of policy formulation, resource provision and creating an enabling environment for entrepreneurship to thrive, saying, “in my view, the government is doing that”. Ms Ismaila noted that “as we continue to brainstorm in identifying ways through which we could build a thriving entrepreneurial ecosystem; one sure way is by building a viable support base system such as incubation.