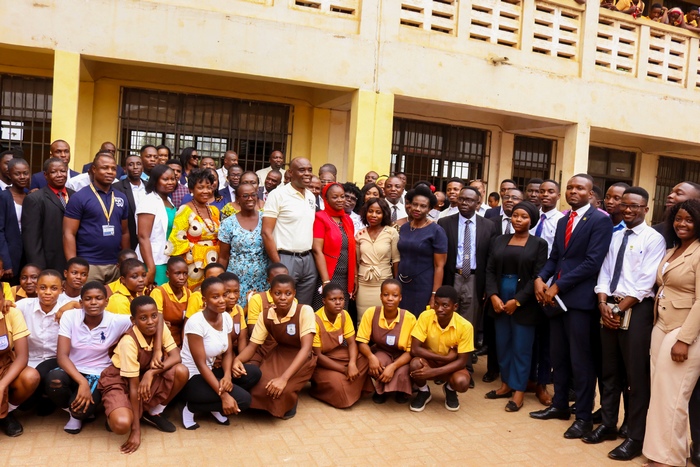 It was all joy and smiles for pupils of the La Nkwantanang M/A Basic 7 & 8 Schools at Madina in the La-Nkwantanang Madina Municipal when the University of Professional Studies, Accra, formally adopted the two schools.

The adoption of the school is the first under the ‘Community Academic Projects’ initiative by the University and forms part of activities to mark its 55th anniversary.

Under the initiative, the University will stock the ICT lab of the schools with modern computers and provide training for personnel to manage the facility.

The University through its community action initiative will also build a canteen for the two schools. UPSA will as well supply books for the library and introduce an awards scheme to motivate staff who go over and beyond the call of duty to contribute to the academic development of the pupils.

Making the announcements during the launch of the project on Monday, February 10, 2020, the Vice-Chancellor of University, Professor Abednego Feehi Okoe Amartey, said apart from becoming the leading business institution in the country, authorities of the institution were working to make it relevant in the community where it is situated, which is the La Nkwantanang Madina Municipality.

He added that the UPSA community-academic project has therefore been established to inspire the underprivileged, improve teaching and learning while motivating the handlers at the basic level with prize incentives.

“We are here today to present ourselves as role models for you to know that it is possible to get to where we are now despite the challenges we faced as young students like you,” Prof. Amartey said.

The Vice-Chancellor in underscoring the importance of education opined that education eradicates poverty and also serves as a family planning tool. Despite these benefits, he said, out of every cohort of four million pupils who complete basic education, only 200,000 are able to access tertiary education.
“Where are all the 3.8 million pupils who could not make it to the tertiary level?” Prof Amartey asked.

He stressed that “out of these children here today, we will have presidents, doctors, engineers, marketers, bankers, business moguls and above all teachers; so there is the need to pay serious attention to their academic developments.”

Prof Amartey further announced that UPSA lecturers were prepared to offer free weekend classes to the pupils as part of their service to the community.

The Headmistress of the Basic School 8, Miss Paulina Kyeremanten, who was delighted about the kind gesture, described the move by the University as “unprecedented, thoughtful and welcoming.”

She added that the projects when completed will not only put smiles on the faces of the pupils but also go a long way to improve their academic performance and personal confidence.

The Head of Supervision and Monitoring at the La Nkwantanang Madina Municipal Assembly (LaNMA), Mr Peter Ngala, who represented the Municipal Director of Education, observed that the visit by the University has served as great motivation for both the pupils and the teaching staff.

Mr Ngala said he was personally overwhelmed by the scope of interventions the University has outlined to improve teaching and learning at the schools.

He, therefore, commended the Management of the University for what he described as “a laudable initiative.”

“The intervention of the university to provide us [with] computers to promote teaching and learning in the ICT is a step in the right direction and I am particularly thrilled,” he said.

He said the Assembly remains committed to partnering any institution or group of persons who wish to embark on similar projects for schools within the municipality.

“Our doors are always opened for new partnerships, and this relationship that it is beginning today [between UPSA and the schools] will travel a long way to support the children we are seeing here today.”

In attendance at the event were the Pro-Vice-Chancellor of UPSA, Professor Charles Barnor and Alhaji Dr Seidu Mohammed Mustapha, the Registrar of the University as well as Deans, directors, heads of departments, and staff and students.

The manifest makeover of UPSA