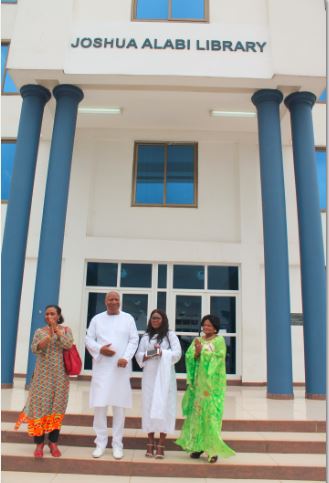 The University of Professional Studies, Accra (UPSA) has unveiled the building names and busts made in honour of distinguished former faculty and staff. The buildings on campus and busts bear the names of former Directors, Chairmen, and Registrars’ of the University to commemorate their work and contributions to the school’s rich history.

From its inception as the Institute of Professional Studies in 1957 until the early 2000s, the campus was only comprised of two buildings. Thanks to the hard work of the University’s governing bodies and the  leadership of  the first Vice-Chancellor, Prof. Joshua Alabi, the campus has quickly expanded over the last decade and now boasts of several buildings including a fully-functioning medical clinic, various lecturing blocks, a central administration building, and a five-story library complex – the largest in all of Ghana.

At a ceremony today, 11th August 2017 to unveil the names and busts, Vice-Chancellor, Prof. Abednego F.O. Amartey stated that it was important for all the buildings on campus to be named after former faculty, not just because of their relationship to the University, but because of the example that it sets for all of Ghana to celebrate and show pride in its countrymen.

Prof. Amartey said the building names show that “it is possible to make it if you are Ghanaian. Students must see that they too can make it”.

Registrar Dr. Seidu Mustapha read the names of the honourees and led the program participants on a campus tour to show the busts and building names.

Several of the honourees and their family members were in attendance to give thanks for the commemoration and share about their time at UPSA.

Below are names of the honourees: