The University of Professional Studies, Accra (UPSA) Students Parliament has held its 6th handing over ceremony on Friday, September 28, 2018, to usher into office new executives who will oversee the smooth administration of the Association over the next one year.

Addressing the students in a pseudo-parliamentary setting, the Minister of State at the Office of the Vice President and Member of Parliament (MP) for Madina, Boniface Abubakar Saddique who also doubled as the Ceremonial Patron of the UPSA-Parliament House charged the newly sworn executives to demonstrate a high level of responsibility and strong attitude of service.

He explains that the youth today are not just partners of national development but leaders of tomorrow and called on the student parliamentarians to understudy experienced MPs if they are to be successful as legislators and transform the society.

Alhaji Saddique however, asked the students to disabuse their minds of amassing wealth if ever voted into the national legislature.

“As youth, you have the power to transform society and are the epitome of peace. (However) most people see Parliament as the point to make money but unfortunately, it is not so. I am sorry to disappoint you all, we are not rich” he lamented. 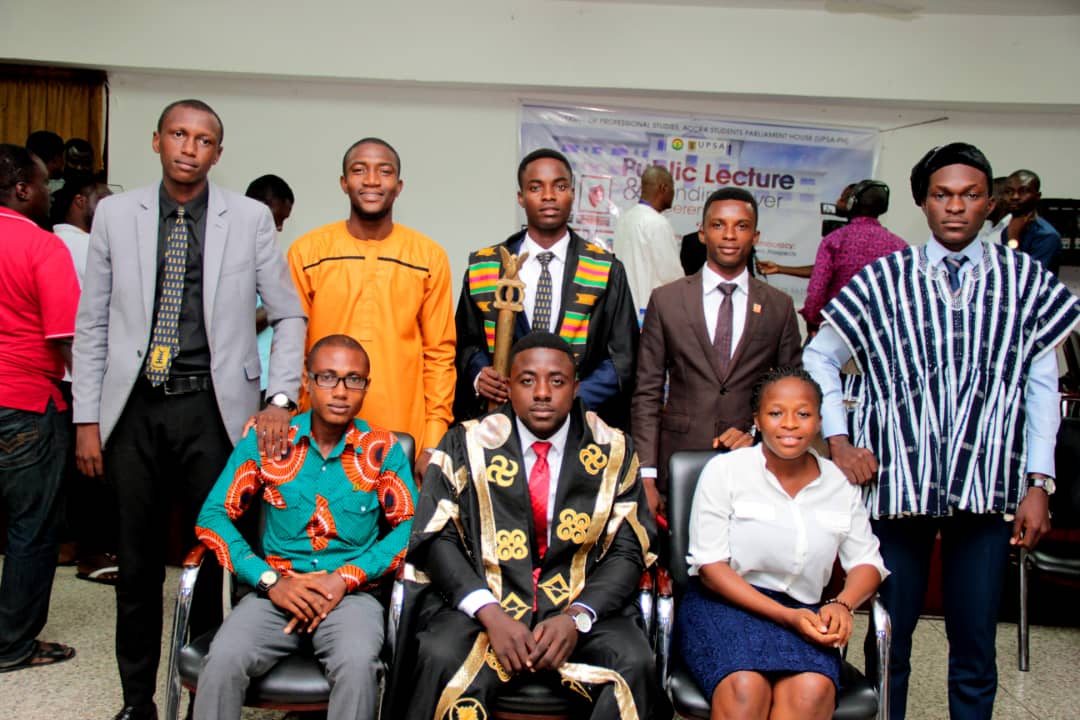 Alban K. S. Bagbin, second Deputy Speaker of Parliament and Special Guest of honour, in a public lecture on the theme: 25 Years of Parliamentary Democracy; The Role of Students- Challenges and Prospect, bemoaned the lack of accountability and transparency in our public governance system.

He said although Ghana has made significant strides in our 25-year journey of democracy, issue of accountability and corruption remains the bane of our very existence.

“Accountability is not just about money. You send someone on an errand and they cannot give you a simple report. You give people money and they cannot account for it. These are some of the challenges I am talking about,” he said.

The longest serving MP thus called on the students to be responsible in the discharge of their duties even as student law-makers so as to transform the very environment they find themselves. The Country Director of Impact Ghana Agenda, Lambert Donkor said one of the many ways students could contribute to national development was by engaging in national debates and deliberating on issues affecting the youth.

Mr Donkor said participating in voluntary works as students and taking up leadership roles were the perfect platforms to nurturing one’s professional ambition.