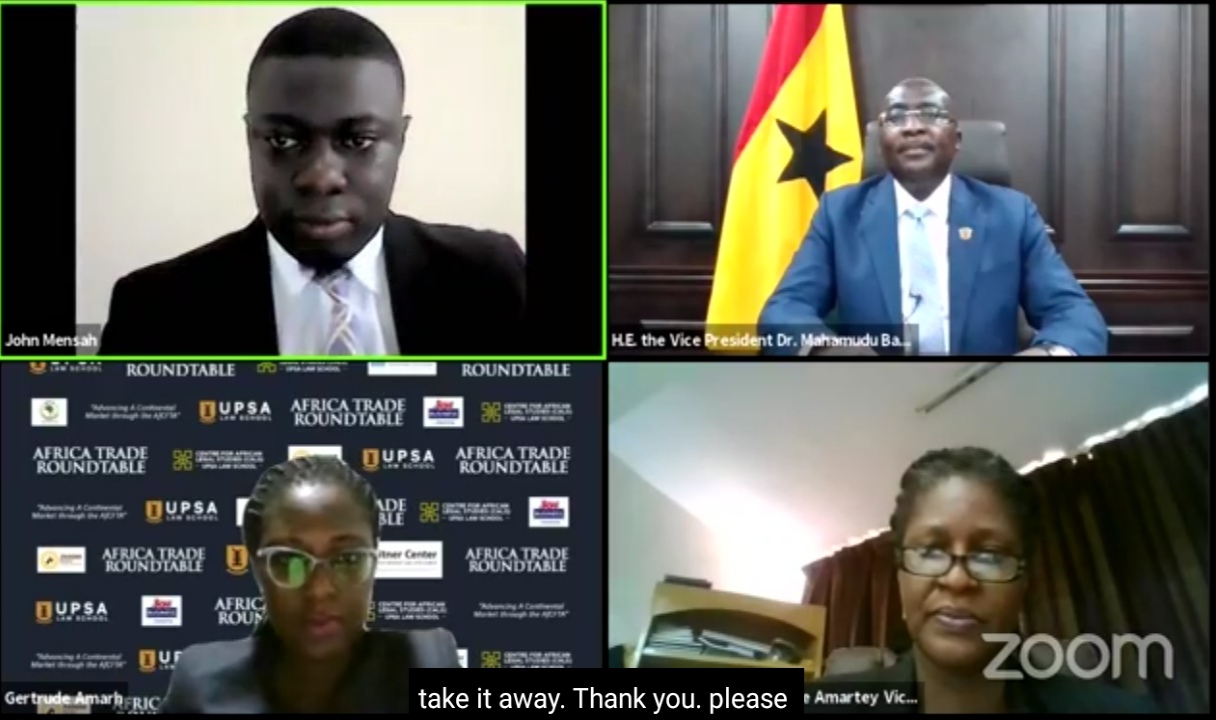 The Vice President of the Republic of Ghana, Dr Mahamudu Bawumia has challenged the leadership of the African Continental Free Trade Area (AfCFTA) as well as Member States of the African Union (AU), and other stakeholders to fast track the implementation of AfCFTA in a manner that will be beneficial to member States and businesses in Africa.

The Vice President made these remarks at the maiden edition of the Africa Trade Roundtable organised by the UPSA Law School on Tuesday, 26 May, 2021 on the theme, “Advancing a Continental Market through the AfCFTA”.

Dr Bawumia, in underscoring the importance and the urgent need for member states of the AU to kick-start trading under AfCFTA said: “The AfCFTA is a key to long term survival of African businesses recovering from the adverse effects of the COVID-19 pandemic and who are seeking to leverage new opportunities in new markets.”

The economic integration of Africa, Dr. Bawumia said, will also lay a strong foundation to achieve the Sustainable Development Goals (SDGs) and the African Union blueprint and masterplan agenda 2063 that seeks to create the Africa that Africans hope for.

Dr Bawumia therefore expressed his government’s unwavering commitment to the operationalisation of the AfCFTA Secretariat in Ghana and to accelerate industrial transformation for inclusive economic growth and development.

Secretary-General of the AfCFTA Secretariat, H.E. Wamkele Mene, who was the keynote speaker for the roundtable revealed that a total of 38 countries have joined the AfCFTA by ratifying the treaty that established it.

This development, he believes, would lead to the improvement of market access and reduce or eliminate barriers to trade on the African continent as well as reduce and eliminate limitations to intra-Africa investment.

Despite these giant strides, Dr. Mene says, the implementation of AfCFTA could be hampered by what he describes as Africa’s shallow industrial capacity, fragmentation of markets, smallness of national economies and the over-reliance on primary export commodities to “countries of the North”.

“We have sustained over the last 60 years, what I call, a colonial economic model which has trapped Africa in a state of underdevelopment for decades after the end of colonialism,” Mr Mene said.

Against this background, Mr Mene says, it is imperative for member states to boost intra-Africa trade beyond the current 18 percent threshold and industrialise the African continent by leveraging on the AfCFTA in order to improve Africa’s productive capacity in the coming decades.

Mr Wamkele Mene also hinted that AfCFTA has for the first time established a forum for the resolution of trade, investment and intellectual property disputes through the protocol on dispute settlement. He said the platform will function like any other court of law in addressing issues brought before it.

In her welcome address, Registrar of the University, Dr Koryoe Anim-Wright said it is not in doubt that the African Continental Free Trade Area (AfCFTA) presents a very bright opportunity to the African continent in her quest to create a single market for goods and services.

However, she noted that, this was not the first time Africa was embarking on such a continental project. Dr Anim-Wright opined that a strong commitment from African countries is required for the objectives of AfCFTA to be realised.

“If the story of the past should be a yardstick, then it behoves us all to ensure that this time our resolve matches our ambition.”

Dr Anim-Wright said as a university that believes in the trade liberalisation of the continent and the acceleration of intra-African trade, the UPSA has taken the leadership position to establish and structure a platform for sustained engagement on the various issues that are affecting the successful implementation of the AfCFTA since its establishment in 2020.

She revealed that the Africa Trade roundtable has been designed to become an enduring feature of the trade policy dialogue on the continent and will be a periodic event going forward.

The event was moderated by Prof Paolo Galizzi, Clinical Professor of Law, Fordham Law School, and Dr Dominic Ayine, Former deputy Attorney-General of Ghana and Member of Parliament for Bolga-East.

About the Africa Trade Roundtable series

An initiative of the Centre for African Legal Studies (CALS) at the UPSA Law School, the Africa Trade Roundtable is designed as a platform for sustained public engagement on the pertinent issues arising out of the implementation of the Africa Continental Free Trade Agreement (AfCFTA).

The maiden webinar sought to gather ideas from international trade experts, scholars and policy makers on two main areas: Trade and Investment facilitation under AfCFTA: the opportunities and challenges presented as well as the implications of AfCFTA for International Commercial Dispute Resolution in Africa.