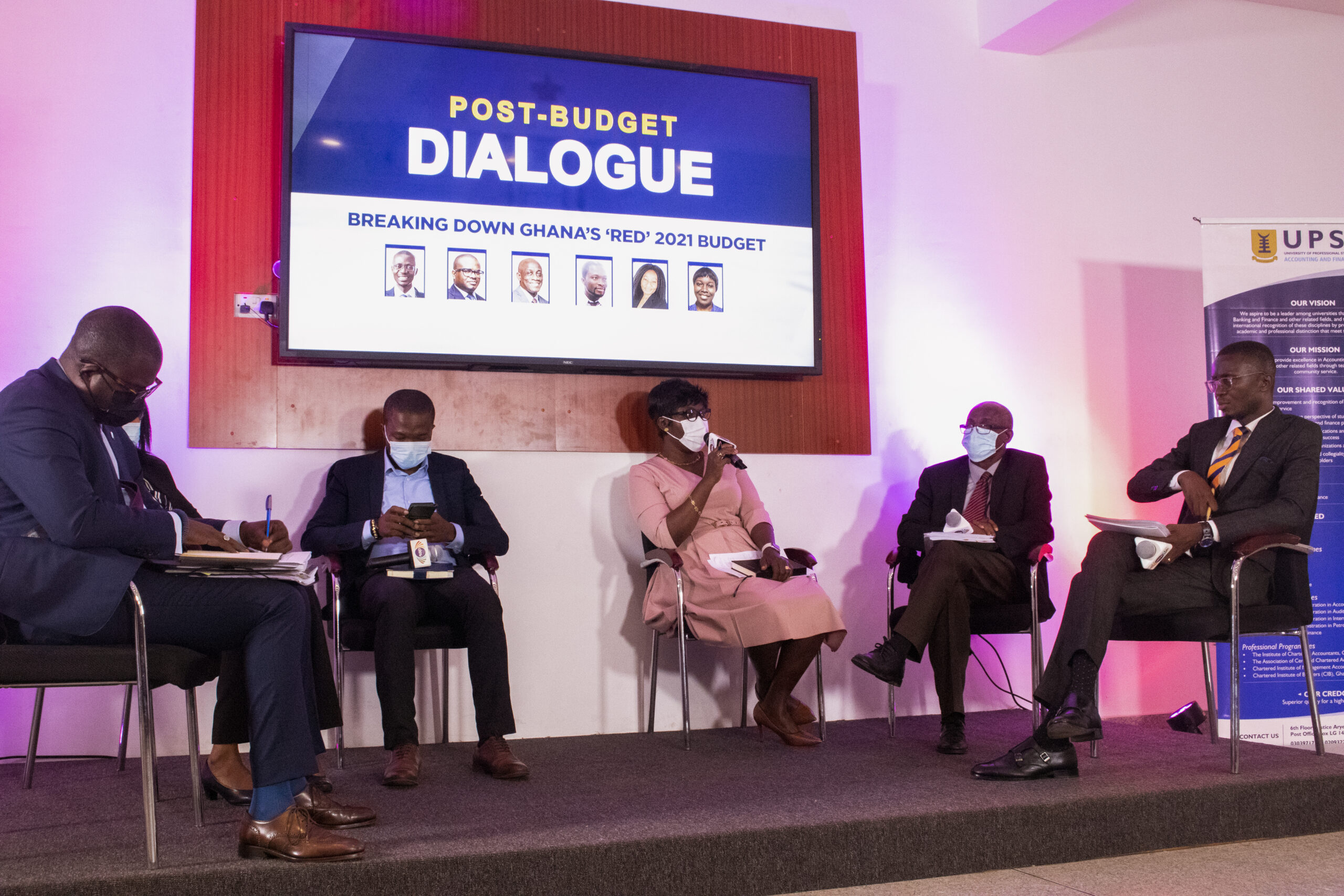 The maiden edition of the University of Professional Studies, Accra (UPSA)’s Post-Budget Dialogue series has taken place at the West Wing of the UPSA Auditorium, highlighting the three thematic areas of the 2021 budget and assessing its impact on the citizenry.

The three main dimensions of the budget – revenue, expenditure and debt were deliberated upon by an assembled panel of experts from government, industry, civil society and academia.

The dialogue, held on Thursday, March 18, 2021 under the theme ‘Breaking down Ghana’s RED 2021 budget’ was jointly organised by the UPSA and Citi TV. It was moderated by ace broadcast journalist and General Manager of Citi FM/TV, Mr. Bernard Koku Avle.

In his welcoming address, the Vice-Chancellor, Professor Abednego F. O. Amartey, stated that the post-budget dialogue is one of the expert engagements under the UPSA Economic Dialogue Series (UPSA-EDS), which has been instituted by the Research and Consultancy Centre of the University to offer a common platform for experts to deliberate on critical national and international issues bordering on economics, finance and accounting.

Prof. Amartey said, in line with the University’s vision to become a world class education provider in both academic and professional disciplines, nationally entrenched, regionally recognized and globally relevant, the UPSA was committed to making meaningful and positive contribution to national development through such fora.

He therefore lauded the management of CITI TV/FM for their collaborations with the institution and urged other stakeholders to come on board for similar projects in the future.

Former Finance Minister, Mr. Seth Terkper said the current economic woes of the country cannot entirely be attributed to COVID-19 because the economy started facing challenges before the outbreak of the pandemic.

“There appears to be an effort to blame everything on COVID-19, but there were problems before COVID-19,” he said.

The Association of Ghana Industries (AGI) on its part called on government to reconsider the imposition of taxes on its members to help sustain business operations in the country.

Madam Adobea Asiama-Aboagye, who spoke on behalf of the AGI, opined that the taxes introduced in the 2021 budget will take a huge toll on the business community particularly at a time when players are struggling to cope with the devastating effects of the COVID-19 pandemic.

“Around this time, businesses need to be cushioned to revamp and recover from the pandemic,” she said.

“The banking sector levy of five percent on pre-tax profit, we don’t expect the banks to absorb this. The likelihood of it being transferred to industries, businesses and individuals is very much on the high side. So we think that should be looked at again.”

Responding to the concerns, the President’s Representative at the Finance Ministry, Mr. Charles Adu-Boahen justified the proposals for new taxes saying the move is to sustain the debts incurred by the government as a result of the various COVID-19 interventions initiated by the President.

He said the only way Ghana will not be caught in a debt trap following the deficits in revenues is to introduce such taxes to ameliorate the situation.

Meanwhile, the Director of the Research and Consultancy Centre at UPSA, Professor Ibrahim Mohammed has hinted that the Post-Budget Dialogue will be an annual event judging from how successful the maiden edition has been.