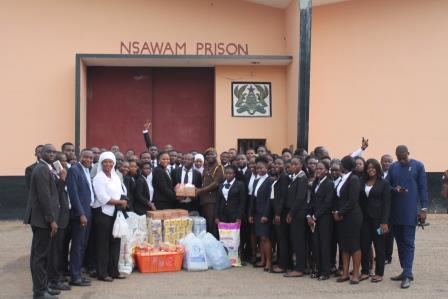 On October 27, 2017, lecturers and students of the UPSA Faculty of Law  embarked on an educational tour to the Nsawam Medium Security Prison.  The trip, which was led by Ms. Mavis Ekua Enyamah Kwainoe, a Criminal Law Lecturer at the Faculty, was organized for faculty and students to have experiential learning of the role of prisons in the criminal justice process.

In addition, the tour was an opportunity for the the UPSA Law Faculty to market itself.  “As you may know the Faculty of Law has been in existence for two years, so this tour will serve as a way to market ourselves,” Ms. Kwainoe stated.

Guided by the ASP Latif, one of the Prison officials, the team was taken to the various facilities within and outside the male and female prison cells.  The team toured a court which had been put up as a result of the “Justice for All” initiative by the Government. It serves as a court of appeal for remand prisoners, and is presided over by a residential judge to facilitate the smooth flow of justice due to high number of remands cases in the country.

Touching on the essence of the prison, the tour guide explained that individuals do not come to the prison to be punished for their crimes, but rather they are given a prison term for them to serve for the crime committed.

The team was also taken around its education unit, which has classrooms to enhance the smooth flow of formal education from the Junior High to the Senior High School level. “We are working to collaborate with some universities to bring on board distance education to the facility,” ACP Edmund Boye, Acting Second in Command (2IC) of the Prison informed the team.

On his part, CSP Tetteh, Head at the Paralegal Unit, indicated that the Unit was established in 2014 with the sole purpose of speeding up the appeal process for remands.

Feedback from the students revealed that the tour had been very insightful.  According Jacob Tizza, course representative for Level 300, the trip allowed him to get a better understanding on the Theory of Punishment. 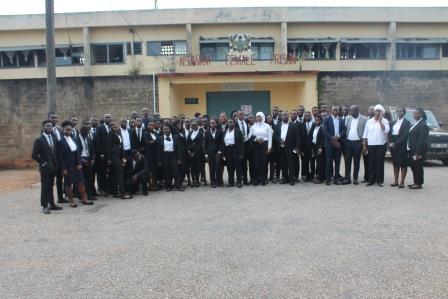 The tour ended with presentation of a donation and song ministration by the Legal Angels, the choir of the Faculty of Law.  In her final remarks Ms. Kwainoe mentioned that the tour had been well organized by the prisons’ staff and was happy to note that the team had been well educated on the how the prison system works in Ghana.   She also indicated that once in a while, the Faculty would donate their widow’s mite to the facility.

The Nsawam Medium Security was established in the 1950s as a result of overpopulation in the existing prisons at the time. The facility was built with an initial capacity of 850 inmates but as it stands now, it accommodates 3,726 inmates. The prison has a staff population of 463, which include national service personnel and trained teachers.

'I Choose To Live’ Campaign Kicks Off