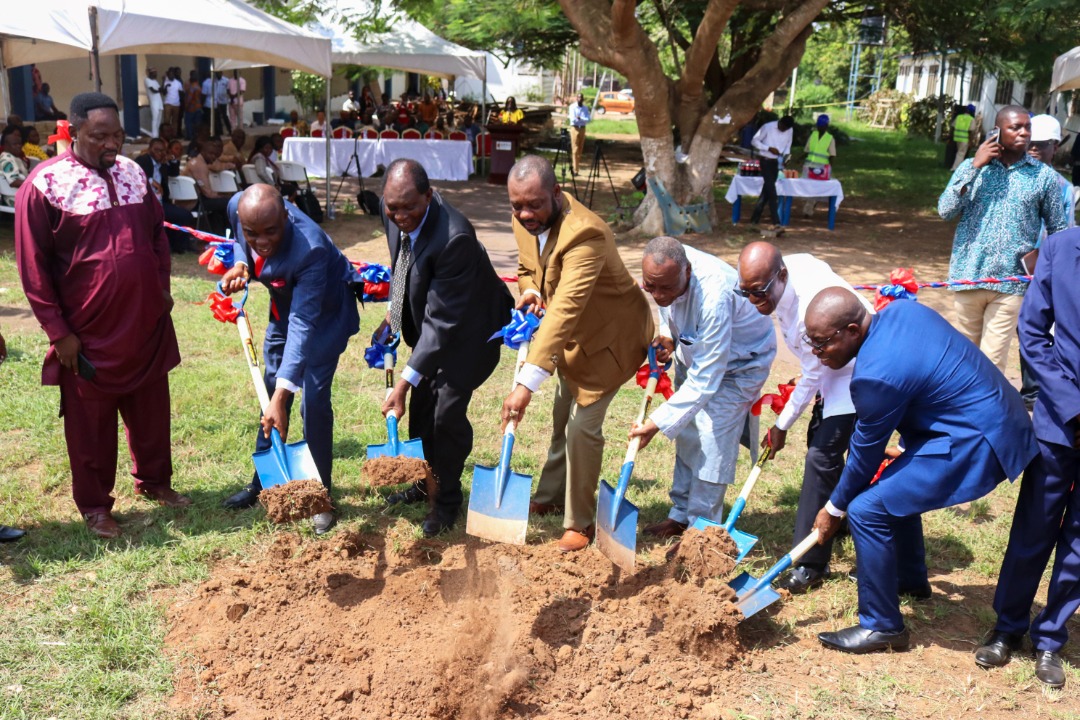 A sod-cutting ceremony has been held for the construction of a ten-floor multipurpose twin tower edifice and two new ten-storey hostel block facilities to cater for the increasing number of student population in the University.

The three projects, estimated at 230 million cedis, are expected to improve teaching and learning and to accommodate more students when completed.

He further stated that the twin-tower will forever represent the sacrifices and pragmatic management of the University community who contributed in diverse ways into making this project a reality.

The Vice-Chancellor, Prof Abednego Feehi Okoe Amartey, reiterated Management’s commitment to ensuring the right ambience and infrastructure are provided for effective teaching and learning to take place. He added that the facilities when completed would be put to good use to ensure value for money.

Prof Amartey also conveyed the University’s gratitude to the Minister of Education for his enormous support in ensuring the project received the needed financial clearance from the Ministry of Finance.

He also commended the management of Access Bank for the mutual support enjoyed by both institutions over the years.

Special Guest of honour and Minister of Education, Dr Matthew Opoku Prempeh, who led the sod-cutting process, lauded UPSA for its infrastructural and educational achievements within the short period of attaining a full-fledged university status.

He also praised the governing council and the University Management for their foresightedness, efficiency, prudent management and innovations in running the university.

He said as the minister, he is thrilled by the progress of the University and maintained that the government was not against any initiatives aimed at attracting infrastructural development to the various public universities, but rather, it was insistent on the judicious management of the resources allocated to such projects through efficiency, accountability, transparency and adhering to due process.

This, he again commended UPSA for the leading the way and called on other public universities to emulate.

The Member of Parliament for the Madina Constituency, Hon. Abu-Bakar Saddique Boniface, on his part, donated twenty (20) streetlights to the University to increase visibility at night and and boost students safety on campus.

The Managing Director of Access Bank, Mr. Kris Ifeanyi Njoku, in a speech read on his behalf, noted that his outfit’s corporate philosophy hinges on sustainable business practices which ultimately aligns to the development of society.

He, therefore, described the partnership with the UPSA over the past ten years as one of the best customer relationships and revealed that they look forward to financing more projects of the University.

In attendance were the Pro-Vice-Chancellor, Professor Charles Barnor, the Registrar, Alhaji Dr Seidu Mustapha as well as deans, directors and staff of the University.

The 10-Floor Twin Tower: with offices, lecture rooms, commercial and residential areas, will replace the existing E.K.A. Arkorful and J.B Buamah Buildings on the University campus. It estimated to cost about 134 million cedis (Gh¢133,903.588.00), and scheduled to be completed in 30 months.

While the two 10-Storey Student Hostel Block is valued at 45 million cedis each – one to be situated on the land adjourning the current hostel and another on a newly procured land near the Trinity Theological Seminary at Legon in Accra. The two are expected to be completed in 16 months.