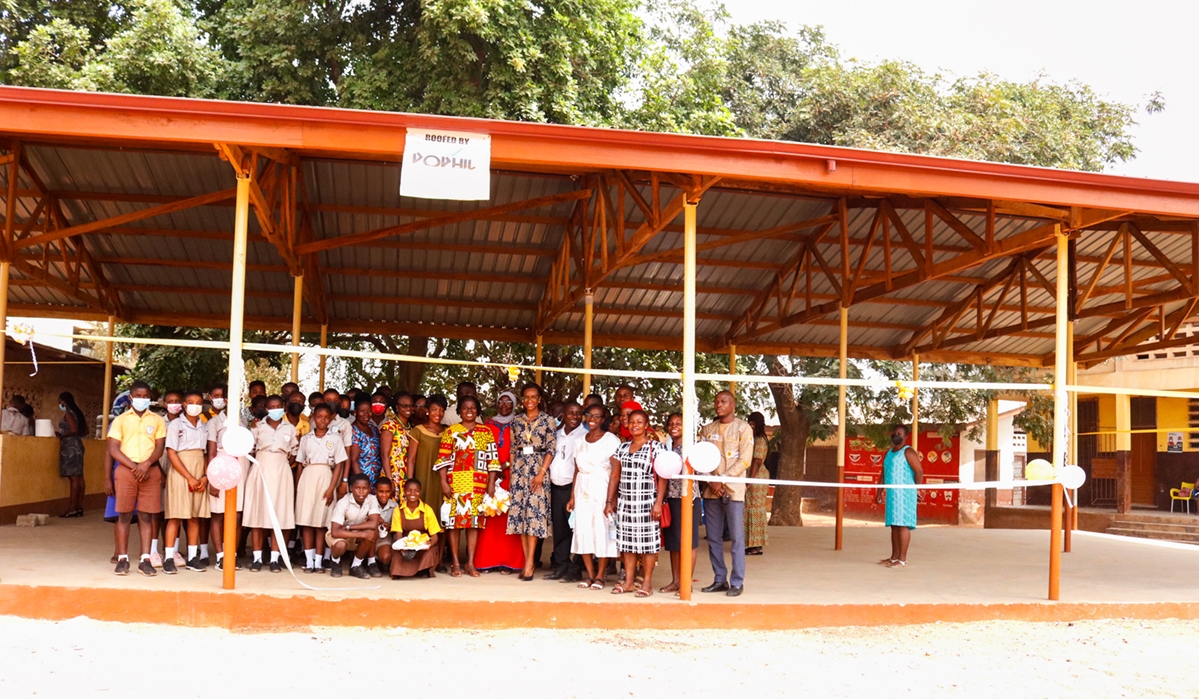 The Management of the University of Professional Studies, Accra (UPSA) has constructed and handed over a canteen facility to the La-Nkwantanang Cluster of Schools at Madina, in Accra.

The new canteen facility comes to replace a derelict canopy shed which hitherto served as a makeshift canteen, exposing community members to the ravages of the weather, particularly anytime it rained.

The University also reconstructed a portion of the school’s concrete fence wall which was raised down several years ago after a flooding incident.

The gesture forms part of the UPSA Community-Academic Project which is geared towards inspiring underprivileged students and improving teaching and learning, especially in public schools by providing educational support services and basic amenities.

Speaking at a brief ceremony on Wednesday to commission the facility, the Deputy Director of Public Affairs at UPSA, Ms Ivy Heward-Mills, who represented the Vice-Chancellor, said the commissioning of the facility was a clear manifestation of UPSA’s commitment to supporting students in deprived schools within the University’s catchment areas.

Ms Heward-Mills disclosed that although the facility was essentially put up for pupils of Schools 7 & 8, it would serve the needs of the entire student body and teaching staff from the other schools within the cluster.

“It’s such an honour and a privilege to serve,” Ms Heward-Mills said. “It is indeed in our core values to be of service, not only to add value to the university community within which we belong and operate, but also to extend that love and service to our neighbours,” she said.

“We have had a soft spot for the pupils of La-Nkwantanang Basic 7 & 8 Schools and our Vice-Chancellor, Professor Okoe Amartey refers to the pupils here as his children.

“He is therefore committed to ensuring that every bit of value that UPSA can help to add to the schools which will [in turn] translate into adding value to these children’s learning and development is marshalled. UPSA is committed to the continuous support and capacity building for the teachers as well to enhance the quality of knowledge they impart to the children.”

The Ghana Education Service’s Circuit Supervisor for the area, Hajia Aisha Abdul-Kadiri, said the facility would go a long way to deal with the problem of inadequate eateries in the school. She said it will also save the pupils from health-related problems that are often associated with the unhygienic conditions under which meals are prepared and sold.

She assured the Management of UPSA that the facility would be put to good use, stressing that they would adhere to the highest standards of usage, a good maintenance culture and put in place necessary hygiene protocols.

On her part, the headteacher of the La-Nkwantanang Basic 7 School, Mrs Roseline A. M. Aglo, expressed her gratitude to UPSA for the great gesture which she said will address some of their immediate needs and change the sorry state of the cluster of schools.

An elated Mrs. Aglo also called on the University to attend to other important needs of the schools.

UPSA adopted the La-Nkwantanang Basic 7 & 8 Schools in February 2020 under its Community-Academic Projects (CAP) initiative, one of the many social interventions to commemorate its 55th anniversary.

The University pledged to give the schools a facelift by providing basic amenities and improving teaching and learning through professional development prgorammes for teachers as well as student motivation schemes.

The construction of the new canteen facility and renovation of the fence wall is, therefore, one of such interventions to address some pressing needs of the two schools.

Some members of faculty from UPSA also visited the schools in November 2021 to offer free tutorials and motivation to final year pupils as they prepared for their Basic Education Certificate Examinations (BECE).