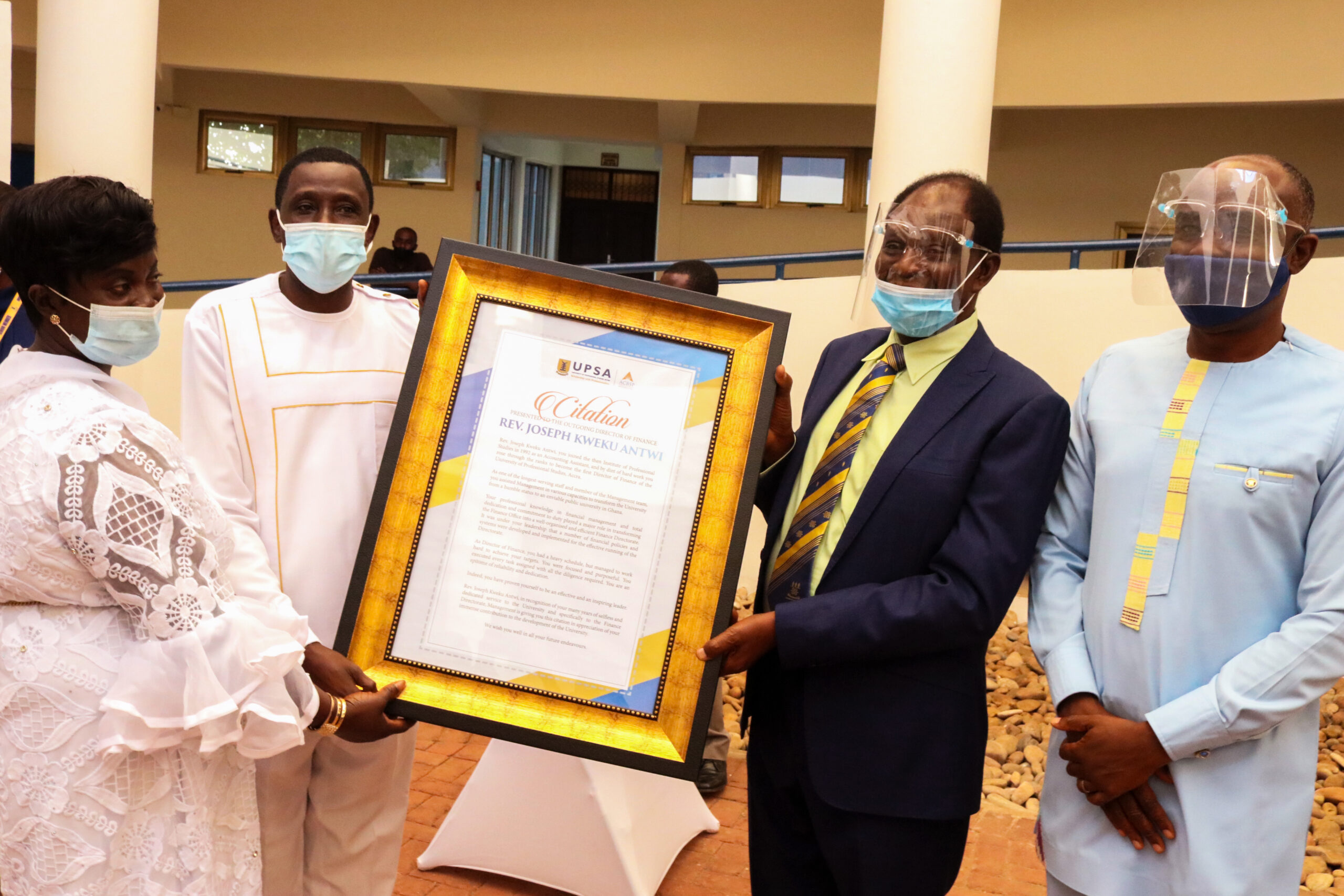 The immediate past Registrar of the University, Alhaji Dr. Seidu Mohammed Mustapha and the outgoing Director of Finance, Rev. Joseph Kweku Antwi have been highly extolled by the governing council, Management and staff of the University for their dedicated service and immeasurable contribution to the University over the past two decades.

The two senior Management team members who proceeded on retirement in July this year, were treated to a colourful send-off reception inside the Rotunda of the Central Administration Building together with their families and guests. They were also presented with certificates of appreciation as well as assorted home appliances.

Speaking at the event, Dr. Kofi Ohene-Konadu, Chairman of the University Council, expressed the Council’s gratitude to the retirees for their outstanding performance and selfless contribution to the development of the university. He appealed to the retirees to adopt a healthy lifestyle as they ‘reunite’ with their families on retirement.

The Pro-Vice-Chancellor, Prof. Charles Barnor, congratulated the two retirees whom he described as his personal mentors, and paid glowing tributes to them for their commitment to duty and excellent working relations with members of the university community.

He urged them to aspire to higher heights even as they proceed on retirement and to explore other endeavours outside academia.

“May the Almighty God bless you for giving your life to this institution, Prof. Barnor said. “The work you have done so far testifies that you have also given hope, life and opportunities to a lot people; and the good Lord will forever bless you.”

Responding to the kind tributes, Rev. Joseph Kweku Antwi thanked the Management of the university, especially the Vice-Chancellor, Prof Okoe Amartey, for the honour bestowed on them. He said he was particularly grateful for the support and guidance he enjoyed under the Vice-Chancellor and revealed that he would miss those moments.

“On behalf of my family and I, we want to express our appreciation to Management for this honour bestowed me,” he said, his voice tinged with emotion.

In similar vein, Dr Seidu Mustapha expressed his gratitude to the University and the Governing Council for providing the policy direction for Management to thrive throughout his tenure.

He said it is fulfilling to see a good work come to an end and assured Management of his availability anytime he is called upon to assist the university with his expertise and experience.

The local Chapter of the Ghana Association of University Administrators (GAUA-UPSA) also presented citations of honour to the two personalities.

Dr. Mustapha’s profile
Alhaji Dr. Seidu Mohammed Mustapha joined the Commercial Unit of the University in 2006 as a Manager and later become the Director of the Unit when it was renamed as the Business Development Centre in 2008. He was appointed Registrar of the University in July 2010, a position he held until his retirement in July 2020. Dr. Mustapha remains the only the Registrar to have served under two Vice-Chancellors.

Rev. Joseph Antwi’s profile
Rev. Joseph Kweku Antwi joined the then Institute of Professional Studies (IPS) in 1992 as an Accounting Assistant. By dint of hard work, he rose through the ranks to become the first Director of Finance when the institution become a full-fledged university. With over 28 years of service, Rev. Antwi is touted as one of the longest-serving members of the university’s Management team.

Call For Applications for Faculty Appointment