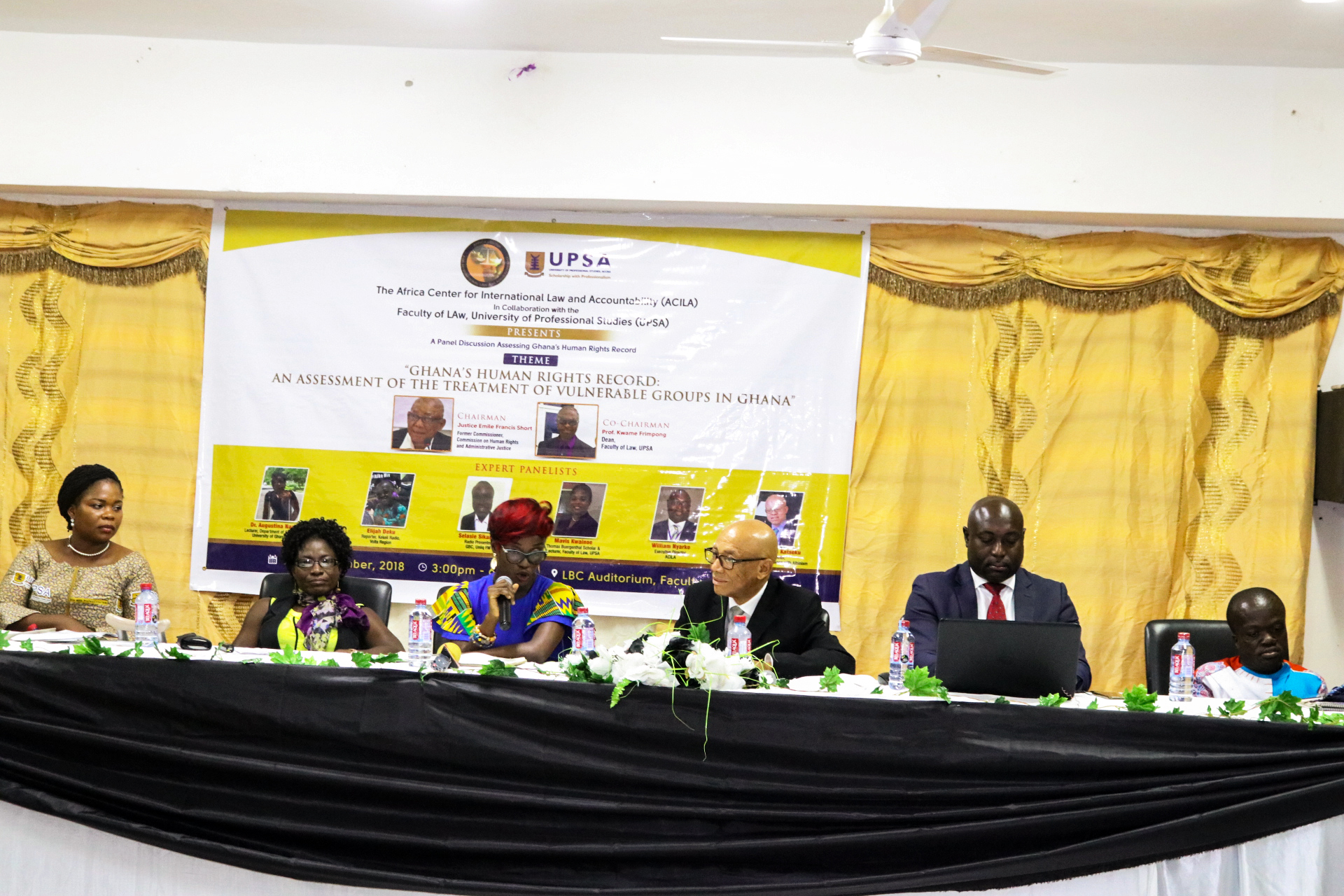 The Africa Centre for International Law and Accountability (ACILA) in collaboration with the Faculty of Law has held a panel discussion assessing Ghana’s human rights record on the theme “Ghana’s Human Rights Record: An Assessment of the Treatment of Vulnerable Group in Ghana.”

The Dean of the Faculty of Law, Professor Kwame Frimpong in his welcome address, noted that the aim of the panel discussion was to attempt to make an intervention to increase quality services, educate and eradicate the impressions people hold about the vulnerable groups in the society.

Former Commissioner of CHRAJ, Justice Emile Francis Short, who chaired the panel discussion said human rights is an essential ingredient of society, hence the need to discuss how the rights of special people such as women, children and the people with disabilities should be considered.

Panelists made up of the visually impaired, persons with autism and albinos among others shared their experiences on the kind of challenges they face in society, as well as how they have been able to overcome these challenges.

Newton Kwamla Katseku, the Executive Director of the Ghana Association of Persons with Albinism, who was one of the panelists stated that people with Albinism are described as legally blind and are therefore part of the vulnerable group in Ghana.

“It will interest you to know that persons with albinism are being prevented from enjoying their fundamental human rights and accessing certain public facilities, thus making us marginalized. Our schools, hospitals, health and other public facilities are not accessible enough,” he said. 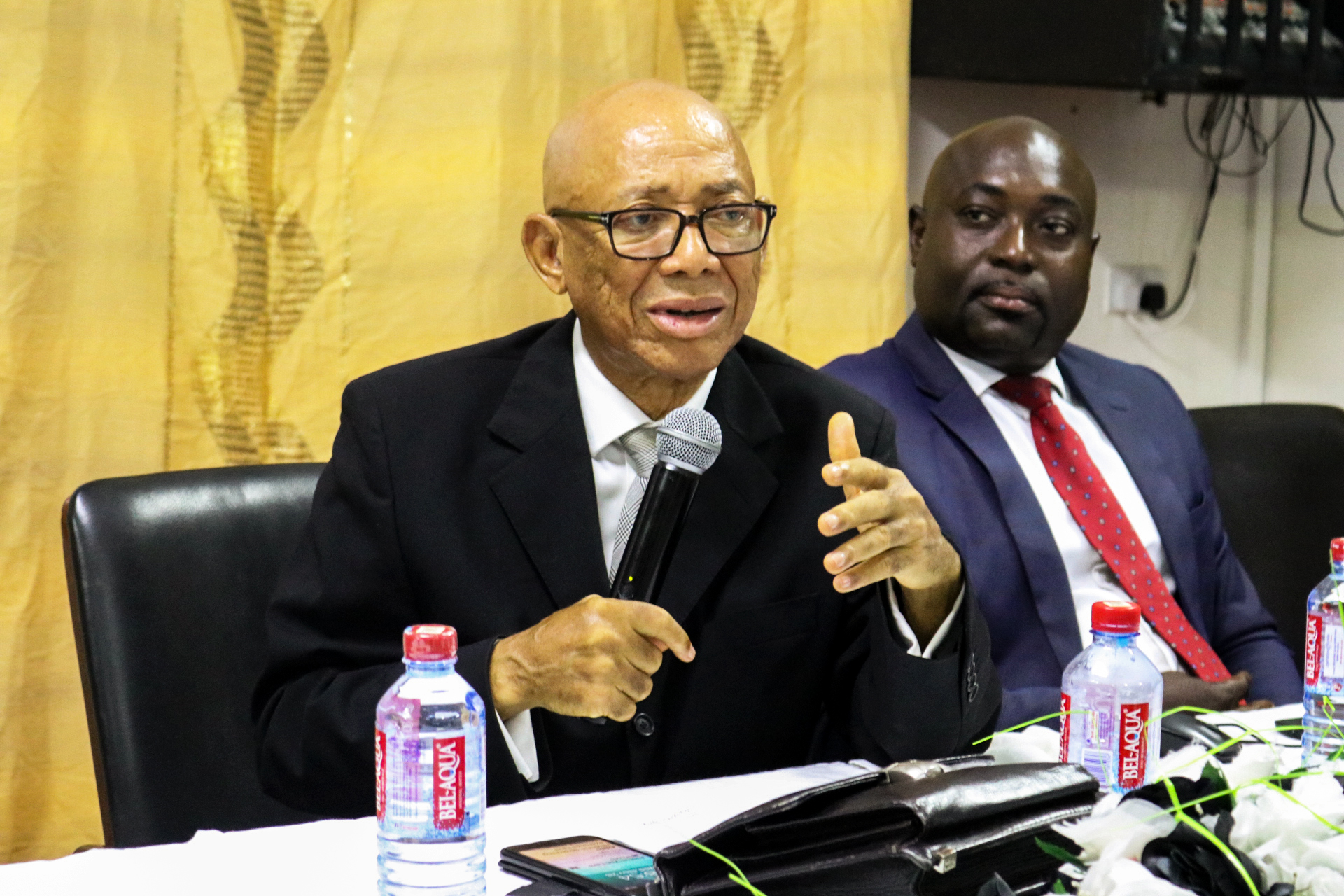 He also mentioned that persons with albinism are susceptible to certain diseases like cancer due to excessive exposure to sunlight and the harsh weather condition coupled with the prohibitive cost of health services.

A radio presenter at Uniiq FM, Selassie Sikanku made an appeal to employers on the need to be compassionate to people with disability, particularly the visually impaired, as most of them go through physical, emotional and psychological problems at their workplaces.  He raised the concern that persons living with disability are not respected at the various workplaces.

“Employers ought to look out for the skills of people they want to employ and not their challenges,” he said.

Addressing panelists on the rights of persons living with disability, Dr. Augustina Naami, a lecturer at the Department of Social Work, at the University of Ghana mentioned that people with disabilities ought to be given equal rights, especially women.

“Women with disability are less likely to be educated, employed, have lower salaries, abused and are more likely to be poor as compared to their male counterparts,” she said.

She added that women with disability are more likely to experience worse conditions, which she referred to as “double jeopardy.”

The Executive Director of ACILA, William Nyarko, also raised the concern that, lesbians, gays, bisexuals, and transgender (LGBT) are considered as people living with disabilities, thus the need for the protection of their rights, although society frowns on them, and their lives are sometimes threatened because of their alternative lifestyles.

Mr. Nyarko added that it was the duty of the State to provide equal protection for such persons.

Other notable participants at the Workshop were representatives from National Commission for Civic Education (NCCE), Amnesty International, students, staff and selected stakeholders.