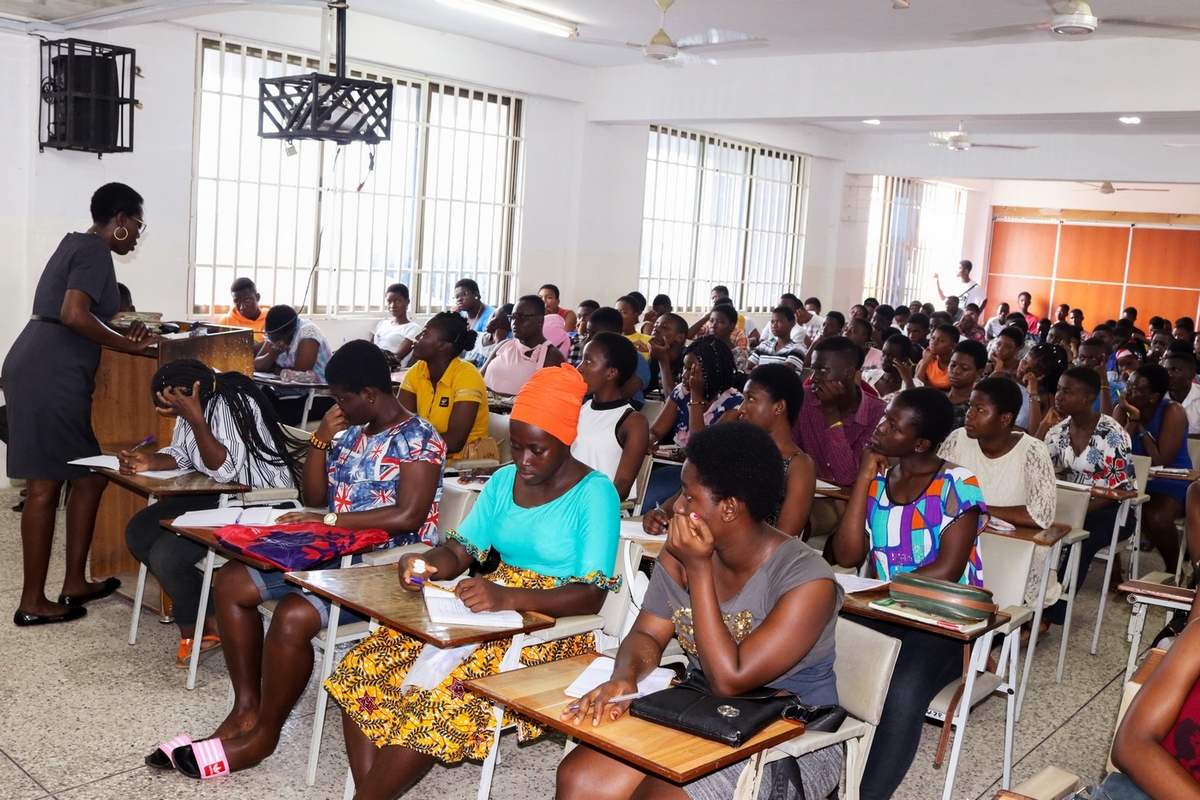 The programme which forms part of the University’s Community Action Initiative saw over 425 pre-SHS, SHS and remedial students benefiting from the intensive-yet-interactive classes which took place between July 3 to August 9th 2019.

Participants during this period were taken through lessons in subjects including Mathematics, Integrated Science, English, French, ICT and an introductory course in Leadership.

Speaking at the closing ceremony on Friday, August 9, 2019, the Vice-Chancellor, Professor Abednego Feehi Okoe Amartey, in a speech read on his behalf, expressed his delight that his vision of making the University relevant to the community has actualized through the implementation of the free-tuition vacation class programme.

“I am very delighted to see this day. Delighted because the UPSA Community Action Initiative started as a simple idea to make UPSA relevant in the community it finds itself.

As a University with the vision to be nationally entrenched, regionally relevant and globally recognized, this initiative was one of the ways of fulfilling this obligation we have given ourselves,” he said.

Prof. Amartey also commended the lecturers for their sacrifice towards the realization of the initiative.

He said: “special applause goes to all the lecturers for voluntarily dedicating themselves to offer free tuition to participants, even though they knew they needed respite for another busy semester ahead.”

“I want you to know that your sacrifices have surely not gone unnoticed,” he added.

The Member of Parliament for Madina and Minister of State at the Presidency, Abubakar Boniface Saddique, who was the guest speaker, lauded UPSA for their community service initiative and urged other tertiary institutions within the constituency to introduce similar programmes to complement government’s ongoing free-SHS policy.

Alhaji Saddique, who was also elated over the high turnout, recounted that but for the scholarship he enjoyed as a child under government’s Northern Development Scholarship Scheme, his dreams of attending the University would have hit the rocks.

“As a beneficiary [myself] of government’s Northern Scholarship Scheme when I was a child, I relish every gesture or initiative aimed at supporting the indigent in society through free education.

This is why when I was the minister for Inner Cities and Zongo Development, I initiated the literacy for all programme under my social intervention module to rid the children off the streets during vacation,” he said.

Coordinator for the programme, Mr Mohammed Sadat, delivering his report, revealed that although close to 800 students registered for the maiden edition, only 425 students showed up due to the ongoing double-track educational system.

He said despite this and other few challenges, the programme was a huge success. This notwithstanding he said his outfit has taken note of some of the loopholes and will address them in subsequent editions.

Mr Sadat also noted that even though the programme was earmarked for indigenes of the community, students from other jurisdictions took advantage of the rare opportunity provided by the University.

He is, therefore, calling on corporate organizations and other philanthropists to support the initiative to help expand it due to the expected high turnout next academic year.

The Chief Director, Ministry of Inner Cities and Zongo Development, Mrs Gifty Mahama Biyira, who represented the minister, Dr Mustapha Hamid, said the ministry is committed to assisting social interventions that sought to ameliorate poverty and illiteracy amongst the citizenry.

Meanwhile, some deserving students who exhibited academic excellence and discipline during the period were awarded by the University.

The free-tuition vacation classes’ initiative for SHS students is the brainchild of the Vice-Chancellor, Professor Abednego Feehi Okoe Amartey, who upon assumption of office in January 2017, itinerated a vision of making the University relevant its community. The programme is administered by the Language Centre of UPSA under its Community Action Initiative.

The six-week intensive class began on July 3, 2019, with about 100 students but the numbers soared to over 425 at the end of the programme. Participants aside enjoying state-of-the-art teaching facilities also had unbridled access to the campus WiFi, library and medical facilities throughout the period.