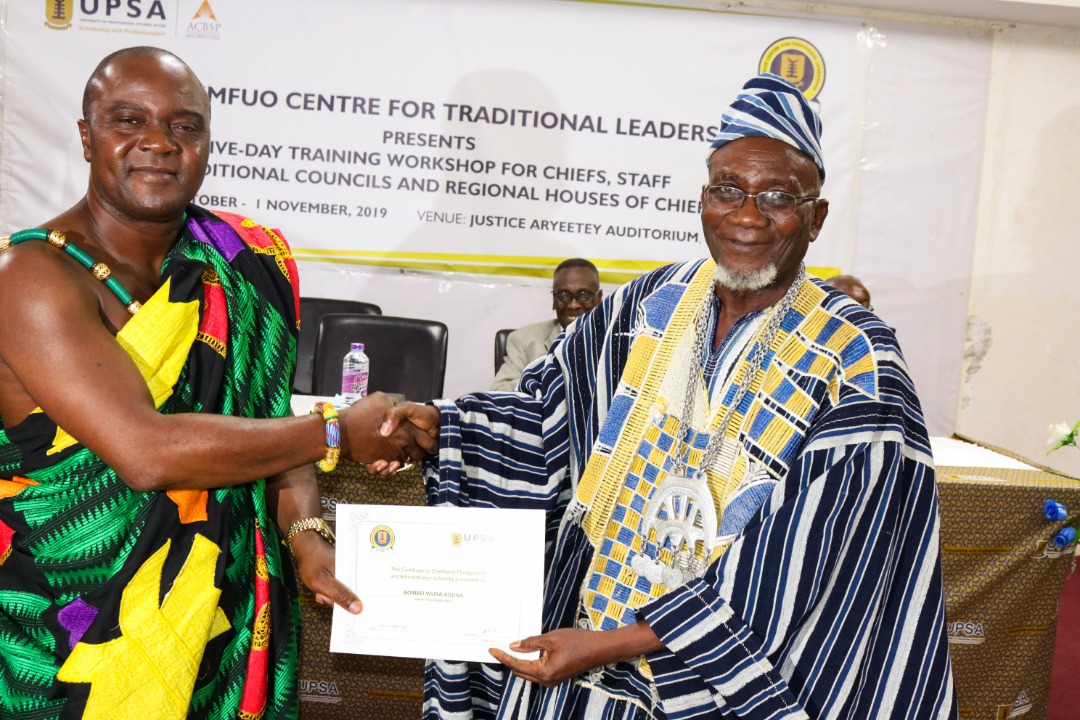 The Otumfuo Centre for Traditional Leadership (OCTL) has for the second time this year organized a capacity building programme for chiefs, staff of traditional councils, regional and national houses of chiefs.

The five-day workshop which began from Monday, October 28 to Friday, November 1, 2019, aims at strengthening the leadership and management skills of the chieftaincy institutions towards sustainable development.

In all, a total of forty (40) participants graduated from the Centre. The traditional leaders were primarily schooled on leadership, management, documentation through cutting-edge topics such as effective land management, conflict resolution, negotiating skills for development as well as records and documentation.

Speaking at the closing ceremony, the Vice-Chancellor of UPSA, Professor Abednego Okoe Amartey, in a speech read on his behalf by Dr Gerald Dapaah Gyamfi (Director of OCTL), said the OCTL has since its creation four years ago, equipped traditional leaders and personnel of the traditional councils with managerial and developmental skills.

Prof Amartey said it is his fervent hope that the cutting-edge ideas and knowledge imparted through the workshop would sharpen the skills of the participants and invigorate them to become effective change agents within their respective jurisdictions in the fight against poverty, hunger, disease, illiteracy, injustice and environmental degradation.

Former High Court Judge and guest speaker, Justice (rtd) Allan Brobbey advised participants to allow the tenets of the law to always prevail over personal beliefs or “common sense” in their quest for justice administration and conflict management.

“One thing you have to learn [as traditional leaders] is that you don’t take chances when you are deciding people’s disputes. Firstly, you read [on the subject] if you can, but if you can’t please enquire from others because applying common sense may mislead you and it may not be the law,” he admonished.

Speaking on behalf of the graduating class, Nana Owusu Pinkra II, Kontihene of Kintampo traditional area, called on the government to recognize chiefs as strategic partners in nation building.

He said there was a need for traditional leaders to be involved in the planning, awarding and execution of contracts in their areas. This he says would give supervisory roles to chiefs during the implementation of such capital projects aimed at development in their areas.