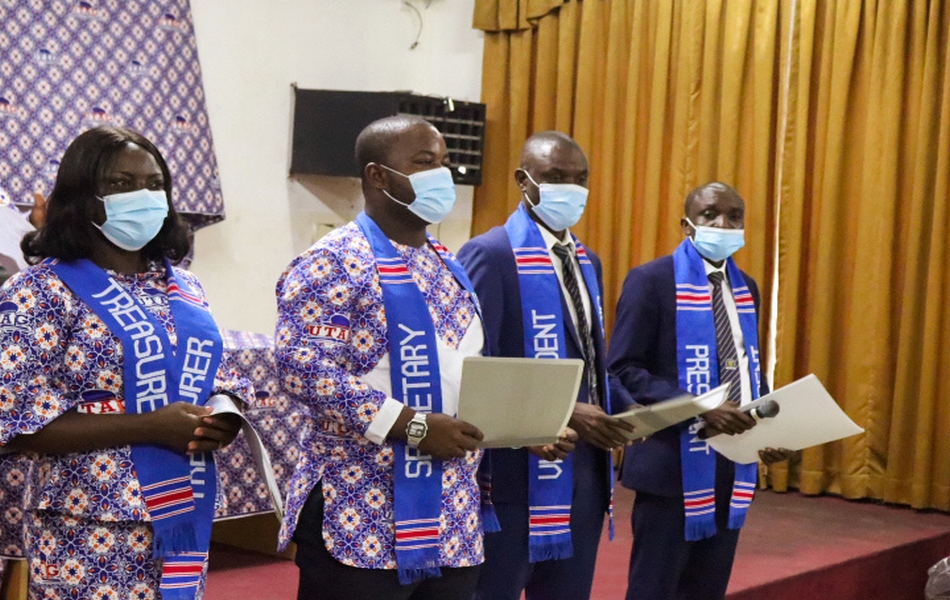 The UPSA Chapter of the University Teachers Association of Ghana (UTAG) has held a handing-over and swearing-in ceremony for its newly-elected leadership.

The new executive, led by Dr. Richard Amankwa Fosu will steer the affairs of the association for the next two years. Other members of the executive include Dr. Mohammed Sadat (Vice President), Dr. Ibn Kailan Abdul-Hamid (Secretary), and Mrs Ivy Eklemet (Treasurer).

Speaking at the ceremony on Friday, September 10, the President of the Association, Dr. Amankwa Fosu expressed his appreciation to the members for their overwhelming support and endorsement of the new executives during the just-ended elections.

He noted that although the previous leadership of the association chalked significant successes during their tenure, there were outstanding works to be done in order to overcome some of the challenges confronting members of the Association.

To address these challenges, Dr. Amankwa Fosu said he would engage the Management of UPSA to address all outstanding issues concerning lecturers’ allowances and medical refunds and will ensure the timely payment of members’ entitlements as enshrined in their conditions of service.

In outlining his vision for the Union, the president said he will ‘lobby’ for the creation of more academic offices such as the establishment of examination offices within the various faculties in order to create new roles for members and relieve faculty officers of some of their burdens.

He added that he will again meet with Management to re-engage the services of lecturers as invigilators for semester examinations and will institute regular medical screening for ageing members.

“In moving the Association even further, we the new executives cannot do so without the support of our entire membership,” Dr. Amankwa Fosu stressed.

“We need your support. We will try as much as possible to carry every member along [with us] irrespective of their gender, religious background or status; especially to our colleagues that we contested and won, we will bring everyone on board.”

The Pro-Vice-Chancellor of UPSA, Prof. Charles Barnor who chaired the programme, commended the outgoing executives for their selfless service to the union and the University at large and congratulated the newly-elected leaders.

He advised the new executives to not put themselves above those who elected them into office but rather “show empathy and understanding” towards their needs by always seeking to work in the interests of members.

The Pro-VC assured the new executives of the support of UPSA Management in addressing their needs.

The outgoing President of UTAG, Dr. Ampem Darko urged the new leadership to continue from where his administration left off and strive to protect the interests of members at all times.

The ceremony was attended by representatives of other sister unions, such as GAUA, FUSAG and TEWU who delivered solidarity messages in support of the Association. Also present were past executives of the UTAG-UPSA, Heads of Departments, Deans and Directors.