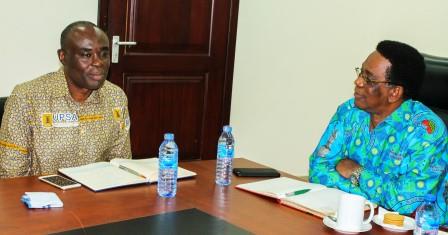 The Minister of State in charge of Tertiary Education, Prof. Kwesi Yankah, on Friday, paid a courtesy call to the University of Professional Studies Accra (UPSA)  to get to know more about the university. Professor. Yankah took office in April 2017 and has since begun touring various universities and tertiary institutions across the country, meeting faculty and staff to hear their concerns, and outline some of his goals for the sector.

Professor Yankah acknowledged the great strides that UPSA has made since it became a university in 2008 and its innovative approach to increasing research and capacity building of faculty and students.

He held an open forum with the Deans and Administrators who gave their input regarding issues of concerns that they would like the government to address. The staff also offered solutions they believe would be beneficial to institutions across the country. Issues raised included the financial clearance from the Ministries for hiring of new staff, streamlining of the accreditation process, and the use of internally generated funds (IGF).

The Minister of State stated that he has a special project targeted at how to assist students denied admission to the universities because of poor results in the West African Senior School Certificate Examination (WASSCE). Prof. Yankah would like to analyse the implications of a low WASSCE mark in relation to a student’s ability to perform well in the university and see if there is cause for universities to reconsider the way they assess students with low scores. 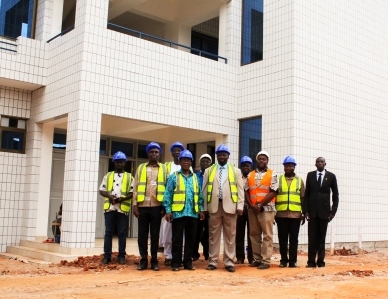 The Minister of State also wants to promote more avenues of higher education aside from the universities such as polytechnic institutes to raise students’ awareness of their various options following secondary school.  After the meeting, Vice Chancellor Amartey led the ministerial delegation on a tour of the campus to see the newly named buildings and take an exclusive tour of the Student Life Building which is set to open next month in September.

After the meeting, Vice Chancellor Professor OkoeAmartey led the ministerial delegation on a tour of the campus to see the newly named buildings, ongoing infrastructure works including an auditorium. The team also inspected the Student Life Building which is set to open next month( September 2017).