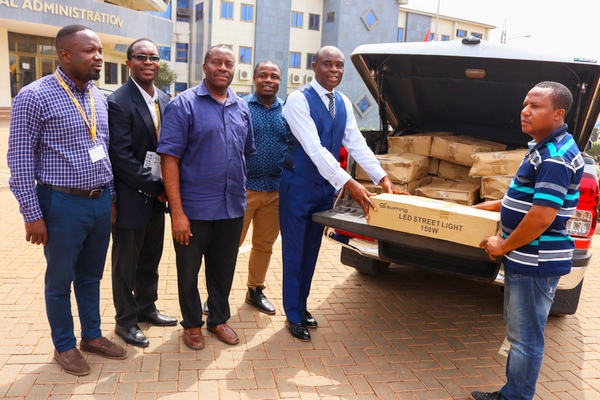 As part of efforts to enhance the safety of students and increase visibility at night on campus, the Deputy Minister of Energy, Dr. Mohammed Amin Adam has donated thirty (30) LED streetlights to the University.

In a brief presentation made on his behalf at the forecourt of the University’s Administration Block on Thursday, January 23, Dr Adam said he was impressed with the measures put in place by the Management of the University to ensure a conducive and safe environment for students and members of the University community.

The Founder and former Executive Director of the Africa Centre for Energy Policy (ACEP) indicated that effective security cannot be achieved in higher institutions of learning such as UPSA without proper illumination on campus especially during the night, hence his motive for the kind gesture.

The Vice-Chancellor of UPSA, Prof. Abednego Feehi Okoe Amartey, who received the donation on behalf of the University, expressed gratitude to the Minister and commended him for making the safety of students and staff a major priority.

He reiterated the commitment of Management to prioritize the needs of students, who constitute one of the university’s key stakeholders.

Last year, the Ministry of Energy also mounted streetlights on principal streets around the University after authorities of the school petitioned the Ministry for help in the wake of reported cases of attacks on students at night.