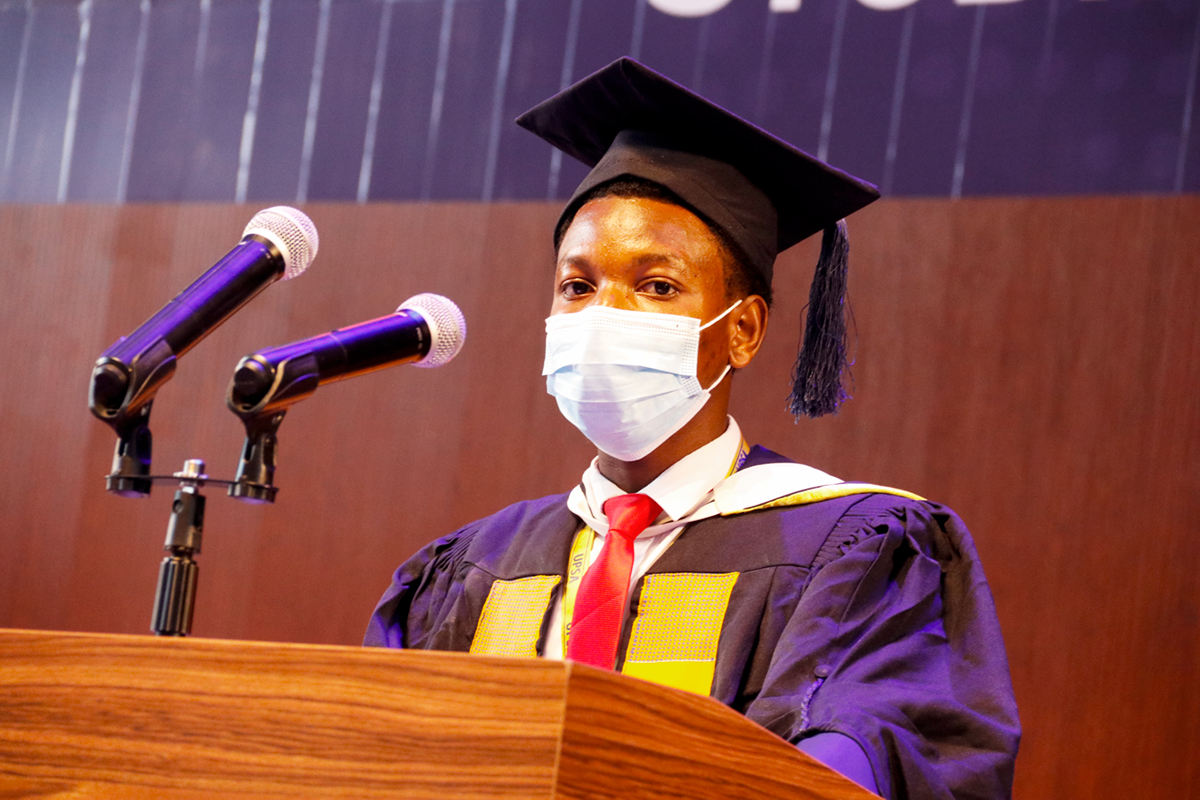 Ali Inusah who once lived on the scrublands of Katamanso, shepherding cattle, is now an inspiration for many young people in his community and across the country, after graduating with distinction from the University of Professional Studies, Accra (UPSA).

As a son of a herdsmen, Ali had to balance schooling and assisting his father with his work. Sometimes, he says, he was compelled to do his homework while looking after the cattle in the bush.

Ali, the last of five children, began his basic education at the Katamanso Presbyterian Basic School, in the Kpone-Katamanso Municipality in Greater Accra Region, where he completed in 2014.

Through a scholarship from the District Assembly, he continued to the Wesley Grammar School in Dansoman for his secondary education where he studied Business and completed as the best business student in 2017 with seven (7) ‘A’s and One (1) ‘B’.

With such impressive grades, it was not difficult for any student to be admitted into a tertiary institution in the country. But that was not the case for Ali, as his impoverished background meant he was going to face some difficulty funding his higher education.

Inusah says his parents did not have the financial capacity to send him to the university despite his almost-perfect WASSCE results.

“There was no money at home,” Ali said as he narrated his rocky journey into UPSA. “Not to even speak of money to buy forms for university.”

Recognizing his plight and accepting his fate, Ali returned to his childhood ‘job’ as a herder, frequenting the lonely-yet-animated forests of the Shai Hills in search of fresh grasslands for his herd.

To him, all hope of furthering his education, at this point, seemed lost and his dream of becoming an accountant appeared to have evaporated with the wind.

However, in his state of hopelessness and despair, he miraculously encountered Umaru Sanda Amadu, a journalist with Accra-based Citi FM through his elder brother, Umaru Inusah.

As the plight of Ali was discussed on live morning radio, the Vice-Chancellor of UPSA, Prof Abednego F. O. Amartey stepped in to offer a full scholarship to the industrious young man in October, 2017.

Ali Inusah thus became one of the first beneficiaries of the Vice-Chancellor’s Endowment Fund (VCEF), a scholarship scheme that identifies and supports brilliant but financially-challenged Ghanaians who desired an opportunity to undertake tertiary education at the UPSA.

Four years on, Ali has graduated with a First Class Honours in Bachelor of Science (Accounting) and emerged the valedictorian of the graduating class of 2021.

Delivering his valedictory speech, Ali thanked UPSA, especially the Vice-Chancellor, and the management of Citi FM for reviving his dream of getting a university education and for making it possible.

“Today, I am truly humbled to have benefited from these scholarships,” the visibly elated Ali told the congregation.

“But for this scholarship opportunity, I wouldn’t have been here. I am, therefore, appealing to all corporate bodies to support the Vice-Chancellor’s Endowment Fund so it can assist other equally bright students like me.”

This achievement, he says, he owes to the benevolence of some philanthropists and well-wishers.

“I am very grateful to the [many] philanthropists and family friends especially Mrs Joyce Opoku-Duodu for her immense support and impact [over the past four years in school]. I also want to show my appreciation to my mom, for her immeasurable love and encouragement.”

The rising star is urging all students not to relinquish their dreams but rather keep on working hard towards climbing the proverbial good tree, for which, he says, they would one day receive the needed push.